Skip to main content
To provide you with the best experience, Suchipakari Amazon Eco -Lodge & Jungle uses its own and third-party cookies on its website for technical, analytical and marketing purposes. By continuing to browse our site, you are agreeing to our use of cookies. Please consult our Cookie Notice for more information. 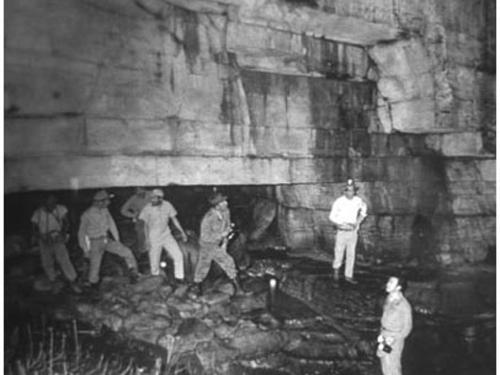 The cave is made up of massive blocks of stone which seem to have been cut out using some sort of advanced machinery tens of thousands of years ago.

It features precision cuts and extremely well-polished surfaces which many authors believe are traces left behind by an advanced ancient civilization. Furthermore, it is said that the cave was home to a METALLIC LIBRARY. Some of the metallic plates recovered from the cave are said to have been on display at Father Crespi’s museum in Ecuador. 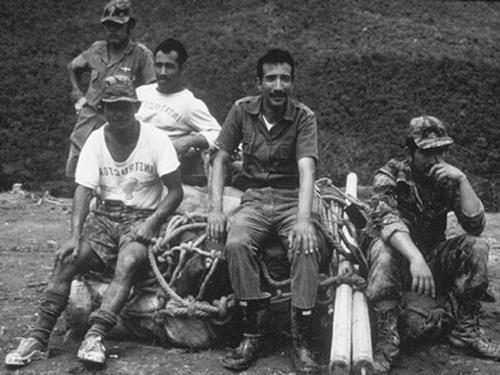 (Steatornis caripensis), is considered among many authors and explorers one of the greatest enigmas in the Americas, and many agree that the truth hidden deep inside the cave will force us to completely rewrite the history of mankind. there are some authors who assert that the Cave of the Tayos records an ancient history that took place on Earth which goes back in time to 250,000 years.
Even today, the cave of the Tayos (Morona Santiago, southeast of Ecuador) remains the obsession of many explorers who seek to find in its interior the answer to the enigma surrounding the colossal blocks of stone that make up the cave’s walls and ceilings. Neil Armstrong himself was part of a great expedition that in 1976 explored the Ecuadorian Amazon.

Interest in the cave continues and three documentaries dive into their mysterious tunnels to try to shed light on the countless enigmas that surround it.

But let’s get back to basics. 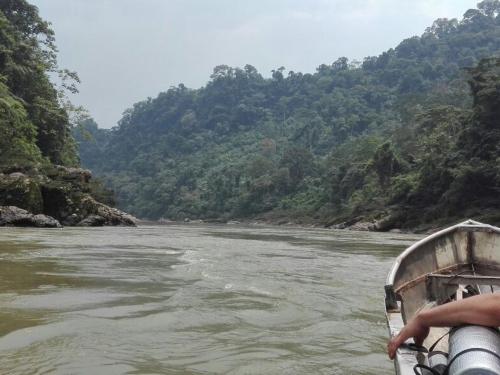 The Cave is located in the virgin high jungle 2 km south of the Santiago River and 800 meters east of the River Coangos (Kuankus); According to the latest measurement in 2012 with GPS altimeter, it is located at 539 m above sea level.

Getting inside the cave is anything but easy. In order to access the cave’s mystery chambers, you have to descend abseiling 87 meters through a first level and another 25 until the entrance of the tunnels.” 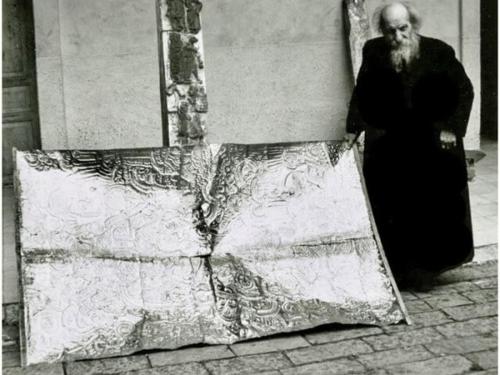 The legend lies in the large megalithic blocks of stone—which are polished and cut with laser-like precision—that make up some of the rooms of the cave and the numerous mysterious metallic plates engraved with ideographic writing of which Hungarian-Argentine researcher Juan Moricz spoke about in the sixties.

The best evidence of the mysterious metallic places can be traced to Italian Salesian Carlos Crespi Croci, who had explored the area in the 1940s and acquired from the Shuar Indians some of the objects they allegedly removed from the cave. 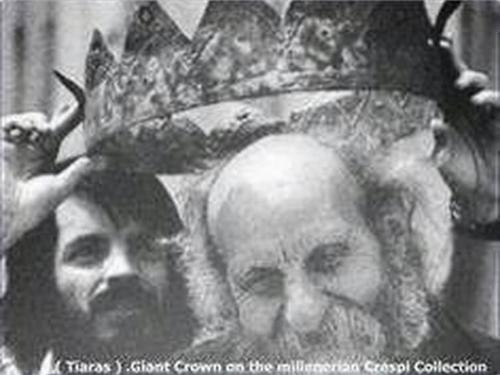 Various pieces were given to father Crespi as thanks for members of the Shuar community and were kept in the Private Museum of Carlos Crespi Croci in Cuenca (Ecuador).

Of these objects, only a few photographs and videos remain, since most of them were sold and others stolen after a fire in 1962. After the fire, nothing was left in the museum, not even pieces of ceramics which would have surely resisted the fire. 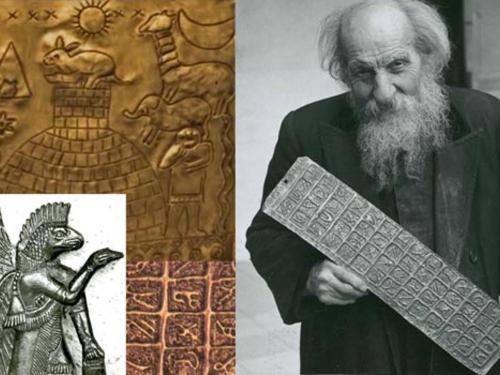 Since his death in 1982, nothing is known of the plates, only the testimony and limited writings and images of Crespi with objects.

In 1973, Erich  Von Daniken wrote about the enigmatic structure where books were made out of metal, and that the region near the cave—and the cave itself—were evidence of an extremely advanced—if not extraterrestrial civilization. 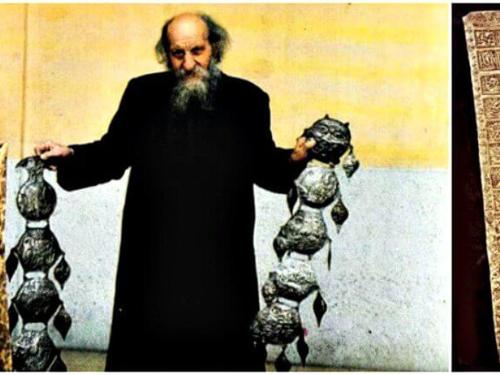 Author Juan Moricz is said to have found signs of an extremely developed ancient civilization inside the Cave. In a signed affidavit dated 8 July 1969, he spoke about his meeting with the Ecuadorian president, where he received a concession that allowed him total control over this discovery—provided he could produce photographic evidence and an independent witness that corroborated the discovery of the underground network. Several newspapers reported on the expedition that Moricz had organized writes author Philip Coppens.

According to Moricz, the Metallic Library of the Cave of the Tayos records an ancient history that took place on Earth which goes back in time to 250,000 years.

In 1972, Moricz met with von Däniken and took him to a secret side entrance through which they could enter into a large hall within the labyrinth. Apparently von Däniken never got to see the library itself, just the tunnel system.

Von Däniken included the event in his book The Gold of the Gods:

“The passages all form perfect right angles. Sometimes they are narrow, sometimes wide. The walls are smooth and often seem to be polished. The ceilings are flat and at times look as if they were covered with a kind of glaze… My doubts about the existence of the underground tunnels vanished as if by magic and I felt tremendously happy. Moricz said that passages like those through which we were going extended for hundreds of miles under the soil of Ecuador and Peru.”

As a result of the claims published in von Däniken’s book, an investigation of Cueva de los Tayos was organized by Stan Hall from Britain in 1976. One of the largest and most expensive cave explorations ever undertaken, the expedition included over a hundred people, including experts in a variety of fields, British and Ecuadorian military personnel, a film crew, and former astronaut Neil Armstrong. Why would Neil Armstrong—who had returned from the moon not long ago then—travel with an expedition to a remote cave in the Ecuadorian amazon?

The team also included eight experienced British cavers who thoroughly explored the cave and conducted an accurate survey to produce a detailed map of the cave. There was no evidence of Von Däniken’s more exotic claims, although some physical features of the cave did approximate his descriptions and some items of zoological, botanical and archaeological interest were found. The lead researcher met with Moricz’s indigenous source, who claimed that they had investigated the wrong cave and that the real cave was secret

The British expedition extracted 4 large sealed wooden crates without exposing to the owners (the Shuar) their content, the matter ended (according to a Spanish researcher) with shots fired between the Shuar and the English expedition.

The oldest traces of habitat in the caves date from the upper Paleolithic period (48 000—12 000 BC) where the cave provided protection during the end of the glaciation.

Approximately 9000 BC, the civilization leaves the cave thanks to the improvement of Earth’s climate and they move towards the south towards parts of Peru and the north of Chile.

In the Neolithic age, the cave is believed to have been inhabited from 3000 BC. by a Pre-Shuar civilization, which was already using ceramic artifacts, evidence of which we can find at the University of Munich which even performed radiocarbon dating. Approximately around 1500 BC. the first Shuar begin to settle in the area and merge with the natives of the cave. The Shuar guard the cave with great respect and believe that there rest the spirits of their ancestors and the God called Nankupa

To date, there is no reliable evidence of the veracity of this metal library.

The only things recovered from the cave—which are found resting in the Catholic University of Quito—are several archaeological pieces and remains of a so-called spondylus shell, that was especially valuable for the primitive cultures of the Ecuadorian coast.

Interestingly, architect and historian Melvin Hoyos, Director of Culture and development in the Municipality of Guayaquil had some very interesting things to say about the cave:

“To begin with, I think that the cave of the Tayos is not a cave, but a work of the hand of man, there is nothing in nature that can resemble the Cave of the Tayos. It has the ceiling completely cut flat with a 90-degree angle to the wall. It is very similar to other tunnels of similar characteristics and age in other parts of the world, which leads us to think that before the Wisconsin glaciation there was a network of tunnels on the planet, but to accept this we would need to accept the existence—before said Glaciation—of a highly developed civilization. “